We trust that you enjoyed your Memorial Day weekend if you are living in the United States. Podcast Movement is grateful for all of the brave men and women in this community (and/or family members) that represent or have served our armed forces and allies. We appreciate your service and sacrifice. We also give thanks to the men and women who have fought and died to allow the freedoms that we enjoy today… and we recognize podcasting is one of those freedoms.

Memorial day is also often is seen as the official start of summertime. That means it is time to get outside, possibly go for a swim, watch the kids blow dandelion fuzz, grab a cold beverage, and enjoy some warm weather.

Summer is also a great season because when it arrives, that means Podcast Movement is just around the corner! We are less than 60 days away from the annual “can’t miss” event of the year for podcasters.

We have some announcements this week that are so exciting, you may need to put on a pair of sunglasses because they’re so bright!

The Academy of Podcasters are pleased to announce the Hall of Fame class for 2018. As a refresher, the Academy has an open nomination process each spring where ANYONE can nominate qualified podcasters as potential entries into the Hall of Fame. Then, existing Hall of Famers vote on the nominations to determine that year's class. Below are this year’s inductees! 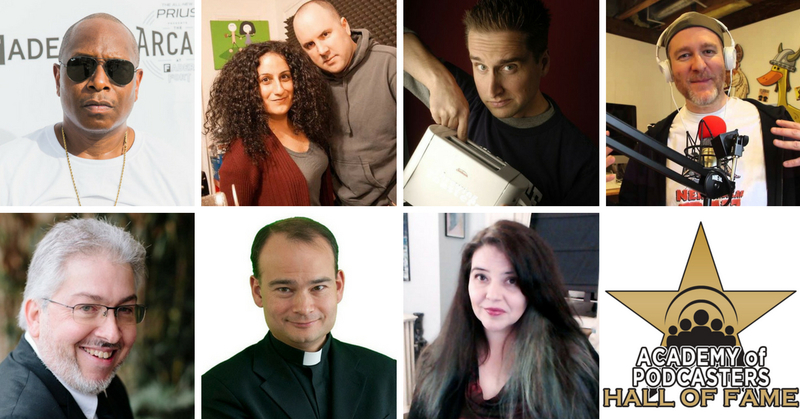 Reggie Ossé AKA Combat Jack
Reggie Ossé (July 8, 1964 – December 20, 2017) was a hip hop music attorney, executive, founding partner of the Loud Speakers Podcast Network, and host of the podcast The Combat Jack Show. He also was the host of Gimlet’s podcast Mogul. Ossé will be inducted posthumously this summer in Philadelphia.

Keith Malley and Chemda
Best known as hosts of the comedy podcast Keith and The Girl, Keith Malley and Chemda have been putting out daily shows since March 2005. Many of today’s top podcasters credit KATG as being pioneers that got them into the podcasting world! The show has been featured in dozens of publications, including the NY Times, Wall Street Journal, and lead to Time Out NY naming Chemda “The Queen of Podcasting.”

Dave Jackson
Dave Jackson is an award-winning podcaster who has been podcasting since 2005, and has been the host of nearly a dozen different podcasts over the last decade. Dave is best known as the host of School of Podcasting, where he’s helped thousands of new and experienced podcasters launch their shows, and become better hosts.

Grant Baciocco
Grant Baciocco is a content creator and performer who is on the forefront of all things new media. In 2004 he created the popular, family friendly podcast The Radio Adventures of Dr. Floyd which has been releasing episodes ever since, garnering awards and praise from iTunes, SPIN Magazine and TiVo. He has since hosted and produced the Henson.com Podcast, amongst others, and is the founder of Saturday Morning Media.

Pamela Gay
Dr. Pamela Gay is a an astronomer, writer, and podcaster who uses new media to engage people in science and technology. She is best known as the host of Astronomy Cast, where each week she takes listeners on facts-based journeys through our Cosmos. She is currently the Director of Technology and Citizen Science at the Astronomical Society of the Pacific.

Roderick Vonhögen
Father Roderick Vonhögen is a Roman Catholic priest from the Netherlands who works as a new media broadcaster and television presenter of programming related to Catholicism and pop culture. He is best known for starting the Star Quest Production Network, the leading Catholic podcasting platform, in 2005, and as the host of The Walk and The Daily Breakfast.

Scott Johnson
Scott Johnson is a cartoonist, illustrator, designer and podcaster. In 2008, Johnson launched FrogPants Studios, an illustration and audio production company, and has since put out over a dozen different podcasts, including the award winning Film Sack and The Morning Stream. Scott has also built a vibrant online community of fans around the FrogPants network of shows, and event organized their own annual event called Nerdtacular.

We invite everyone to join us this July 24 for the Academy of Podcasters Hall of Fame Ceremony, as well as the pre and post ceremony events, live from Philadelphia. Please join us in congratulating these deserving future Hall of Famers.

Podcast Movement is thrilled to once again partner with Jacobs Media for the Broadcasters Meet Podcasters track at Podcast Movement this summer. This year the sessions have doubled due to popular demand, and proudly sponsored by Beasley Media Group.

The track will combine the energy and electricity of the podcasting space with the expertise, talent, and reach of the broadcasting world. The Broadcasters Meet Podcasters sessions take place on Wednesday, July 25th and Thursday, July 26th, and feature some amazing speakers, including NPR CEO Jarl Mohn.

Jarl will be giving an opening keynote the first day of Jacobs Media’s sessions, and he notes, “I am excited to be part of the ‘Broadcasters Meet Podcasters’ track of Podcast Movement. I look forward to discussing what podcasting has meant for NPR and public radio. We are in the golden age of audio storytelling. Thanks to podcasts, people are connecting with the human voice and narrative again. And discovering public radio in the process. At NPR we have been using podcasts to experiment with new formats, ideas, talent and voices. It is a cornerstone of our growth.”

You can learn more about this track and some of the sessions from yesterday’s Jacob’s Media press release.

The PM18 Schedule is Live!

We are proud to finally bring to you the nearly complete schedule for this summer’s big event! With over 100 sessions, panels, workshops and keynotes, we will not even try to list them all here. You can view them all via the Conference Schedule page on the website. You can start marking your favorites now, and don’t forget to check in on the latest update of amazing speakers taking the stages!

If you’ve not yet registered, you may want to consider getting a pass that includes the Virtual Ticket when you do. As you know, it is impossible to attend all of the sessions, so the next best strategy is to plan which presentation you will attend in person, and which ones you will make plans to view later on with the Virtual Ticket! And if you can’t make it to Philly, you can get the Virtual Ticket as a standalone pass!

We are excited to hear which sessions you are planning to attend in person. Please feel free to share this with us in the Podcast Movement Community group on Facebook.

Join us this summer for the podcasting event of the year…we promise to turn the A/C on for you!

As you can tell from everything we've discussed so far in this week's newsletter, PM18 will be bringing the heat to Philadelphia this summer…we'd hate it if you were not there!

Helpful links to maximize your PM18 experience (and savings)

Finally, we put together a short list of helpful links for the conference in the Facebook Community. Please feel free to take a look, and as always you can send an email to [email protected] if you have any questions.

Want to attend or schedule a meetup? www.podcastmovement.com/unofficial-events

Whether you decide to work on your tan, go canoeing, or watch fireworks, we look forward to the possibility of seeing you in Philadelphia this July!