We hope that everyone in the US had an enjoyable and safe holiday weekend, and maybe even got some good deals on Black Friday, Small Business Saturday, and Cyber Monday! If you got a great podcast-related deal, Tweet at us to let us know.

We're trying out all kinds of different things with this newsletter, and this week we're really excited to introduce (or re-introduce) you to one of the members of the Podcast Movement community.

Matt Marr is the host of the Dear Mattie Show. His podcast is a modern day Dear Abby with your gay best friend, which is an entertaining advice podcast where he and a guest co-host answer listener questions about family, depression, job, stress, relationships and more.

He is originally from Oklahoma where he received his master's degree in clinical psychology. He is a psychologist by day, but was encouraged to also pursue commercial acting when he moved to Los Angeles. In fact, this is where we first learned about Matt.

Matt might be best recognized from a commercial where he was in a hotel hallway, in his underwear, with Captian Obvious from Hotels.com. He also appeared in a commercial with Justin Timberlake for Target, plus numerous other nationwide commercials for KFC, McDonalds and Intel.

He started podcasting because he loves entertaining, but he wanted more control over at least one of his many projects. Podcasting seemed like the best way to go. Since then, Matt has published over 150 episodes of his own show, and made guest appearances on over 50 others.

Matt wanted to continue to grow his podcasting efforts, which compelled him to get on the Google machine and start searching for resources to help him with some questions about his podcast. His search helped him to learn about Podcast Movement 2014 in Dallas, Texas. While he wasn’t able to attend that particular event due to a conflict with the summer camp that he was starting, he kept Podcast Movement on his radar.

He eventually was able to join us in Chicago at PM16, where he was asked to emcee PMx! Matt said he loved the experience so much that he decided to participate as a speaker the following year in Anaheim, where he signed up to take part in the first ever PMx Competition.

Matt’s talk about Public Narrative was incredible. He explained how to share stories in the most effective way possible using a technique that makes stories more exciting and engaging. Matt’s speech resonated with the audience and judges, so much so that he was announced as the first winner of the PMx Competition, and was awarded the championship belt the following evening!

He was excited to be part of the awards ceremony, and had noticed that also in the audience was Dr. Drew. When Matt took the stage, he was thrilled to win the award, and also took the opportunity to compliment Dr. Drew on how handsome he looked from the stage. It was a funny comment, but little did he know that this would end up creating an unexpected opportunity. Matt was tapped on the shoulder after his acceptance speech by Dr. Drew’s producer, and invited to be a guest on the Adam Carolla and Dr. Drew show! 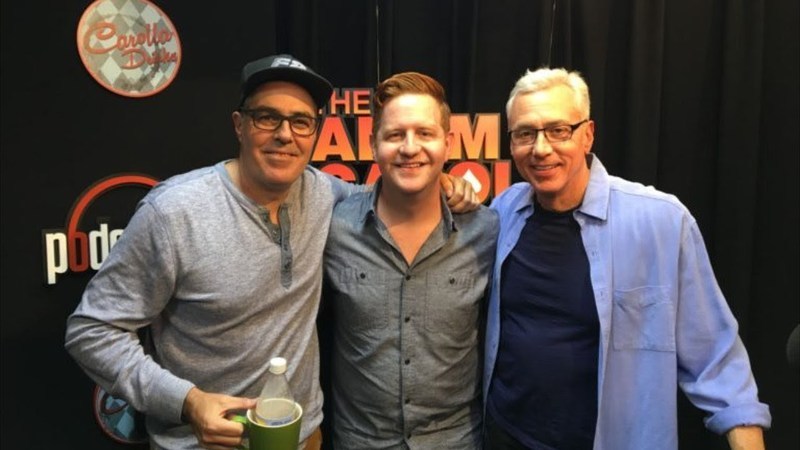 Matt’s advice for anyone that is planning to attend Podcast Movement 2018 in Philadelphia is to:

Spend an hour or two before you go learning about the speakers, sessions, download the app and set up your schedule. When you get there… be prepared to let it all go. Expect to speak with podcasters from all over the world that want to know the answers to the same questions that you have. Be open and stay in the moment to meet great people. You can always watch the sessions later with the virtual ticket, but the conversations will prove to be invaluable.

REGISTER FOR PODCAST MOVEMENT by the end of the year to still get a great price with our Holiday Registration Special, and you'll still also get one of our exclusive PM18 Holiday Shirts!

Have a great rest of your week!
The Podcast Movement team