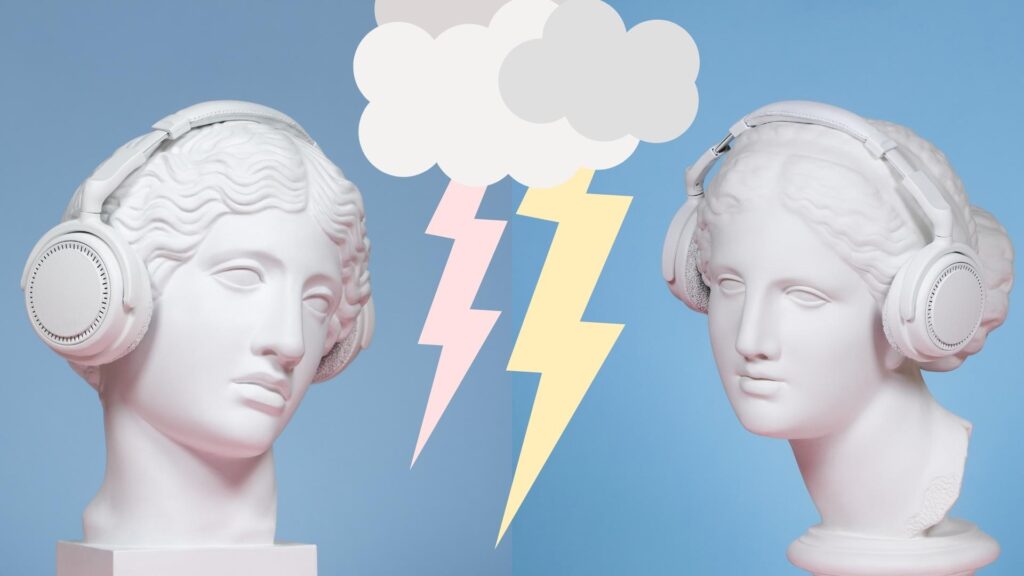 To help podcasters of all experience levels recalibrate awkward interviews, we asked experienced podcast hosts for their stories and strategies. They offer personal accounts of guest shutdowns, total flops, touchy subjects, and what they learned from it all. Read on for expert answers to these situations and more:

The tricky part about interviews is that you don’t always see the awkward moments coming. For your best shot at a smooth conversation, there are strategies you can put in place right from the beginning.

A’shanti F. Gholar, the founder and host of The Brown Girls Guide to Politics, suggests starting the interview by making your guest feel comfortable. “I always ask why they love political work, how they got involved, and what excites them,” she says. “This has been my go-to for not having any super uncomfortable moments.” Finding common ground early, especially with potentially heated topics like politics, can defuse later friction. It gives you a mutual touch point to return to.

After three and a half years and over 180 interviews, Dyking Out co-host Carolyn Bergier cuts to the chase. She simply asks her guests, off mic, what they are not open to discussing. “It really helps us steer clear of awkward moments,” she says. Part of a good interview is challenging your guest to share opinions and stories they’ve never shared before. Setting a respectful boundary early on creates a safe space for them to express, knowing ‘that’ topic won’t pop up.

If it’s your first time meeting a guest, ask if they have time to do 15-20 minutes of bonus content first, and start with light conversation.
—Alice Vaughn, Two Girls One Mic

Alice Vaughn, co-host and producer of Two Girls One Mic, uses a third method for setting up a solid interview. “People are different, and you don't always hit it off when you first begin chatting,” she says. “If it’s your first time meeting a guest, ask if they have time to do 15-20 minutes of bonus content first, and start with light conversation. This way you start building rapport and traction for your episode while getting additional content for fans.” A win-win-win for everyone!

Think on Your Feet

Admittedly, thinking on your feet during awkward situations is easier said than done. Adrenaline kicks in, you’re put on the spot, your face flushes, maybe you stumble over words. Here’s how some of our experienced hosts used quick thinking to get their interviews back on track.

“When something feels awkward, my natural reaction is to apologize and then gauge what I say next based on their reaction to the apology,” says Doug Fraser, the host of NPR’s What We Do. “Typically, an interviewee will say something like, ‘No, no, it's totally fine.’ And then dive more into the topic, opening the floor to a deeper discussion.

On a rare occasion, the interviewee will be upset and say nothing. So I move on to a softer topic as a buffer, which helps get things back on track.” This is a simple and effective move: Back off and let the interviewee know they have the space to either continue or drop the topic. Give them the power to steer for a bit.

Back off and let the interviewee know they have the space to either continue or drop the topic. Give them the power to steer for a bit.

Other times guests just aren’t giving you anything to work with, and the conversation is sounding more like a mom asking her teen about their day at school. “During one interview, we had a guest that was literally giving one-minute or two-minute responses to each question, making it a ten-minute interview,” says Gholar. “I got it back on track by thinking of more questions to ask, and we were able to get more solid and longer answers. It became a great interview.” Consider having four or five open-ended questions at hand just in case your guest hits a wall.

When backup or in-the-moment questions fail to inspire, Bergier steps in in a different way. “I always have a long list of questions as a backup and hope one of those can lead to something interesting, but when that fails, I'll tell my own anecdote or engage my co-host to compensate,” she says. And why not? Your audience is listening because they value you and your story just as much as the guests you bring on.

Interviewing requires the delicate art of reading the room. When is it okay to press a topic and when do you let it go? Do you lean into the awkwardness? Guests come to the mic with their own stuff — a bad day, a busy schedule — and knowing how to navigate that is part of the process.

“I've been podcasting for about two years and have conducted around 60 interviews,” says Fraser. Some of those got uncomfortable. “I once asked a documentary filmmaker about his turbulent relationship with his dad. The topic wasn't out of the ordinary, after all, it was the centerpiece of the documentary he'd created. In the movie, he opens up about his feelings, but there was still plenty room for me to dig. So I brought my shovel.”

I tried asking the question in a different way to find another entrance into his emotions. But he wasn't having it. ‘What, are you a psychologist or something?’ he asked.
—Doug Fraser, What We Do

“Unfortunately, he'd had a day full of interviews already, so he was tired. I struck a rock,” Fraser continues. “When I pressed about how his worldview had been shaped by the things his dad had done to his family, he shut down.

I tried asking the question in a different way to find another entrance into his emotions. But he wasn't having it. ‘What, are you a psychologist or something?’ he asked. His tone was accusatory and a clear sign for me to back off. So I gave an uncomfortable laugh and moved on to a different topic. The rest of the interview I avoided any questions about his dad or feelings.”

Had this guest been in a different mood, maybe he would have been more open about the topic. But Fraser did what any good interviewer would do. He worked around the topic, ultimately letting it go for the comfort of his guest. Would the interview have been more interesting if the filmmaker talked about his dad? Maybe, but Fraser knew to read the room and move on.

Then, there are times when a guest says something truly outrageous. It catches you, the host, the rock of the show, off guard. Perhaps their words oppose the very core of your podcast. How do you react without totally blowing the interview?

Gholar recounts one of these moments. “For one guest, we asked our signature question: What advice do you have for the Brown girls out there listening who are thinking, ‘I want to be just like her?’ The guest responded, ‘Don’t go into politics. Just go make money and give it to candidates.’ In my mind, I am screaming, ‘Ma’am! Do you not know what this show is about? It is about encouraging women of color to get more involved, and you just told them not to!’”

In my mind, I am screaming, ‘Ma’am! Do you not know what this show is about? It is about encouraging women of color to get more involved, and you just told them not to!’
—A’shanti F. Gholar, The Brown Girls Guide to Politics

Shocking as the comment was, Gholar kept her thoughts to herself and corrected the course respectfully. “I got it back on track by responding that candidates and organizations do need money, but we need women of color candidates and women of color leading these organizations for people to give donations to,” she explains. “Until this day I am still so shocked she would say that.” Instead of confronting her guest head-on, Gholar edited the comment in real time, blending the off-brand message with that of her show.

Sometimes, though, a guest brings up a topic or story that needs to be addressed. Bergier has seen this firsthand. “We had an episode where a guest admitted to being physically abusive with partners in the past, and it was both shocking and uncomfortable,” she says. “Usually when we disagree with guests, like the one who said she believes the government controls the weather, we let it slide. This time, we couldn't.”

Usually when we disagree with guests, like the one who said she believes the government controls the weather, we let it slide. This time, we couldn't.
—Carolyn Bergier, Dyking Out

Bergier continues, “I reacted to it like I would react to anyone bringing that up in conversation by calling it out. They tried making excuses and I confronted them about that too, but in a way that wasn't angry or aggressive. More of a ‘come on, now’ tone. They came around and said I was right, and that they've learned from their mistakes and aren't like that anymore. Still, that's the most listener blowback we've gotten on an episode,” she reflects. “People thought we were making light of assault by continuing with the conversation, and because there was some nervous laughter in the mix.”

Some essential takeaways from this experience: Set your own boundaries as a host or co-host when it comes to confronting guests. Podcasts that are confrontational by nature will have very different internal ‘rules’ or ‘limits’ than a conversational show about coffee. Consider treating your guest like you would anyone else and hold them accountable for their actions. Your listeners will appreciate this, especially when a guest crosses a universal line.

There you have it: Part 2 of The Emergency Guide. Awkward interviews happen to everyone at just about every level of podcasting, whether you’ve been doing it for years or are just starting out. Thanks to our featured hosts, you’re now armed with some strategies and confidence to navigate the bumps, as well as the knowledge that sometimes, interviews don’t make it. And that’s okay.

Don’t worry, awkward humans — Part 1 has even more solutions. Even if you never encounter moments like these (and we hope you don’t), they’re sure to entertain and make your next interview feel like smooth sailing.